The technical underpinning of how this is enabled is important, so let's take a look at tasks and task trees before getting into the code.

The foundational unit in running concurrent code in Swift is a Task. Tasks provide an environment in which asynchronous work can be done and can be in one of 3 states: running, suspended, or completed. Tasks are run concurrently as the system decides it is safe and efficient. Tasks may be initially run on one OS thread, suspended, and later resumed on another OS thread.

Tasks compose as a hierarchy, each task can have a series of child tasks. Each child task inherits all of the properties of its parent task, this includes the parent's scheduling priority and actor (see Actors). Finally a task is only complete once each of its child tasks is complete.

When no longer needed, tasks can be cancelled to prevent unnecessary background processing.

Calling .cancel() on a Task.Handle will cancel the task and propogate to each child down the tree. Cancelling a task doesn't actually stop execution, rather cancellation is cooperative. Each child task must periodically check for cancellation and act accordingly, this gives ample opportunity to cleanup in-use resources if needed.
In most cases the right way to exit on a cancelled task is to throw an error. Task even has a built in static method just for this use case.

As mentioned in Async/Await, starting asynchronous work using async let allows for concurrent/parallel processing. async let actually creates its own child task to run in and builds upon the exiting task tree.

In practice, async let works best when you need a known quantity of concurrency, for example when exactly three actions can be carried out in parallel.

In this example isClean, isFull, and milk are not needed immediately and are not dependent on eachother. This is a perfect scenario to use async let. We allow these three functions to run in parallel within their own child tasks. The function will not be suspended after making those three calls, so the code following can continue to run.

Later in the function we get to a point where we need the results of washCow(_:) and isFull(_:) before proceeding, we do that by using await. It is here that we handle any errors encountered as well, indicated by try.

To make local reasoning easy an async let is bound to its defining scope. The implication of scoping on async let requires it to be explicitly awaited otherwise the child task will be cancelled and awaited before exiting the scope.

Here we kick off the same three async let child tasks to care for our cow but only await on milk. By not also awaiting isClean and isFull by the end of the function the child tasks are cancelled and awaited before exiting.

async let is great for when you need a known quantity of concurrency, but what if you have an arbitrary number of asynchronous actions? It’s now time to reach for TaskGroup. TaskGroups provide a dynamic amount of concurrency as each action would be spun off as its own child task and executed in parallel if/when possible. The same semantics for task completion and cancellation apply here as well. For the group to complete each of the tasks must be completed as well.

TaskGroups can be created using the global functions withTaskGroup(... and withThrowingTaskGroup(..., your usage will depend on whether errors can be thrown from the group or its child tasks. In this example we provide the return type for the Tasks Cow.self as well as the return type of the entire group [Cow].self.

Child tasks are added to the group using group.addTask and start executing immediately. The group itself is an AsyncSequence and the results of the child tasks added can be waited on like this. As the tasks complete their result or error will be handled. An unfortunate side effect of parallel processing is the tasks probably won't complete in the order that were added. If the order of the results received is important to maintain maybe consider including the index using an enumeration as part of the child task return type, later you can use this to sort.

Structured concurrency gives us the superpower of looking at a function and easily describing its concurrent nature and flow. The key is scoping and lifetime; a child task cannot outlive its parent. This is true for when you create a single child task using async let or a series of child tasks with TaskGroup.

If we were new to this code base and poked around for just a couple of minutes we would quickly learn the concurrent nature of our app. Seeing the TaskGroup with calls to careForCow would quickly lead to a task tree visualization like this: 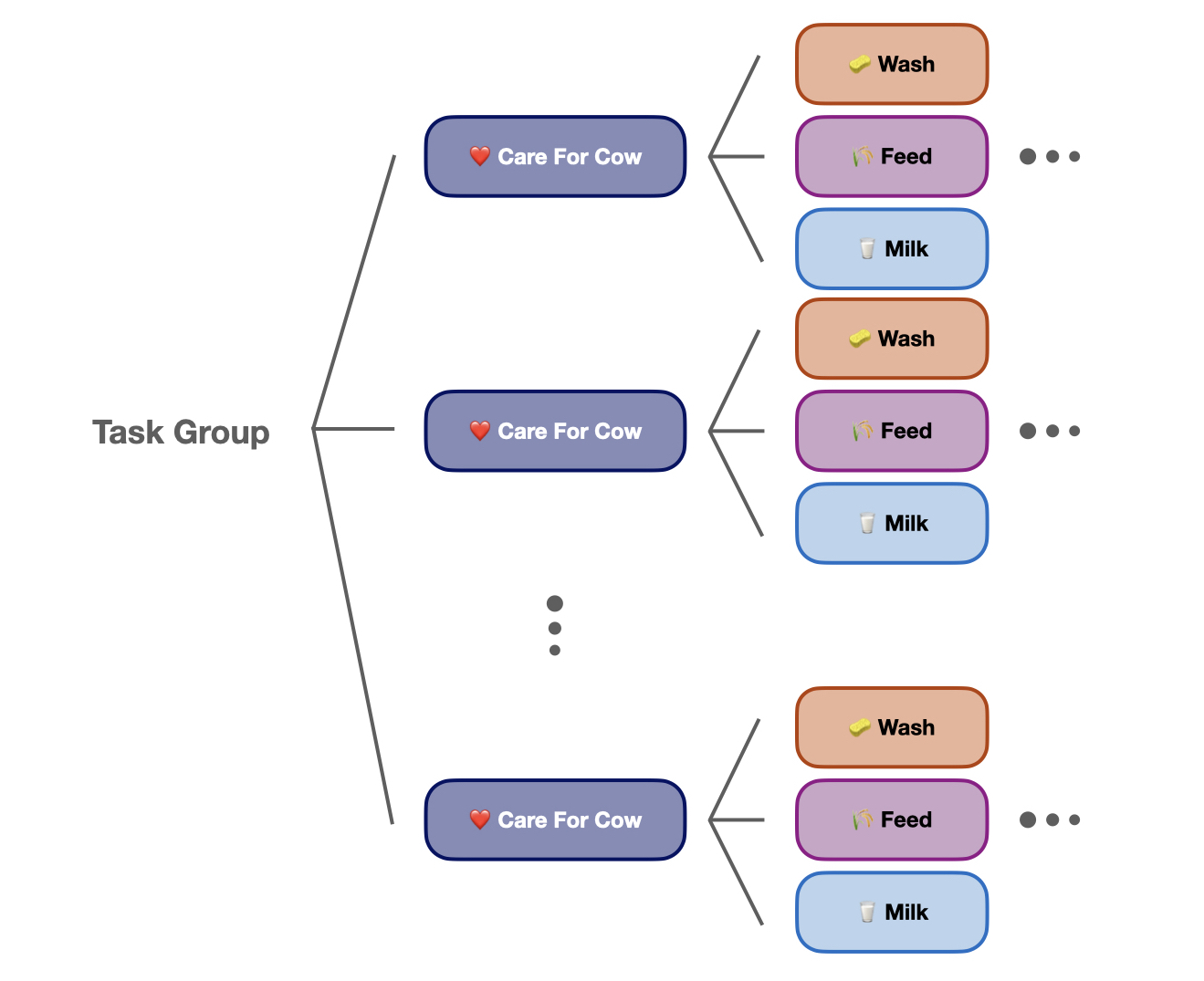 Creating unstructured tasks is very common when kicking off asynchronous work from a non-asynchronous context, like starting data fetches from your UI

Here we are starting some asynchronous work from ViewController by creating an unstructed task. This task initializer Task.init(priority:operation:) takes an optional priority and the async operation to run. Task also provides a static method Task.detached(priority:operation:) to create an unstructured task that inherits nothing from its current context including the current actor (this will make more sense in Actors).

Unstructured tasks are not bound to the scope that they are created in, they run until they are complete or fully cancelled. Creating an unstructured task returns a Task.Handle so you can monitor and cancel the task if needed. Also, not holding on to the task handle is perfectly fine, this is especially refreshing if you’ve been utilizing combine and storing sets of AnyCancellable.