Data races are an unfortunate reality of building concurrent programs. They are easy to introduce and difficult to track down. Let's look at a conceptual data race in this code snippet.

Here we are reading and writing to an shared instance of CowStore from both concurrently executing tasks. One task may write and read before the other task can write and read or both tasks do so simultaneously. This can put our program in an undefined state since the result could be inconsistent across runs. Even worse, this could cause the app to crash!

Fortunately, Swift can now prevent some of these potential data races early with static checking. The previous code wouldn't even compile, we would be presented with this error.

This static checking for potential data races is possible via the new @sendable marker. The closure on this Task initializer is marked with @sendable and requires all passed in data to conform to Sendable. We'll get to Sendable later.

Swift 5.5 brings along actors, a new entity that safely provides shared state access to concurrently running tasks. Actors isolate internal state and coordinate access through a lightweight serialization mechanism ensuring that shared mutable state is only available to one Task at a time.

Actors can be thought of as classes that protect access to their mutable state. Actors require that any modification to mutable state happen from inside the actor, that is to say only the actor instance can modify self. This is referred to as being isolated, wheras anything from outside the actor is non-isolated. Let's see it in action.

Here we've changed CowStore from a class to an actor. When trying to set herdName on our instance store we're met with a new error. herdName can only me mutated from an isolated context, let's add a function to CowStore to do just that.

Now that the herdName is modified from inside the actor within setHerdName(_:) we are one step closer to our desired intent but have a new compiler error. Calling functions and accessing mutable properties behave differently when in an isolated and non-isolated context. While working inside the actor, in an isolated context, we have synchonrous access to every property and function of the actor. While working outside the actor, in a non-isolated context, we have asynchronous access. This is because of the serialization mechanism of the actor; only one Task may access the isolated state a time and the actor may be busy. We use await to suspend execution of our task until the actor is free. 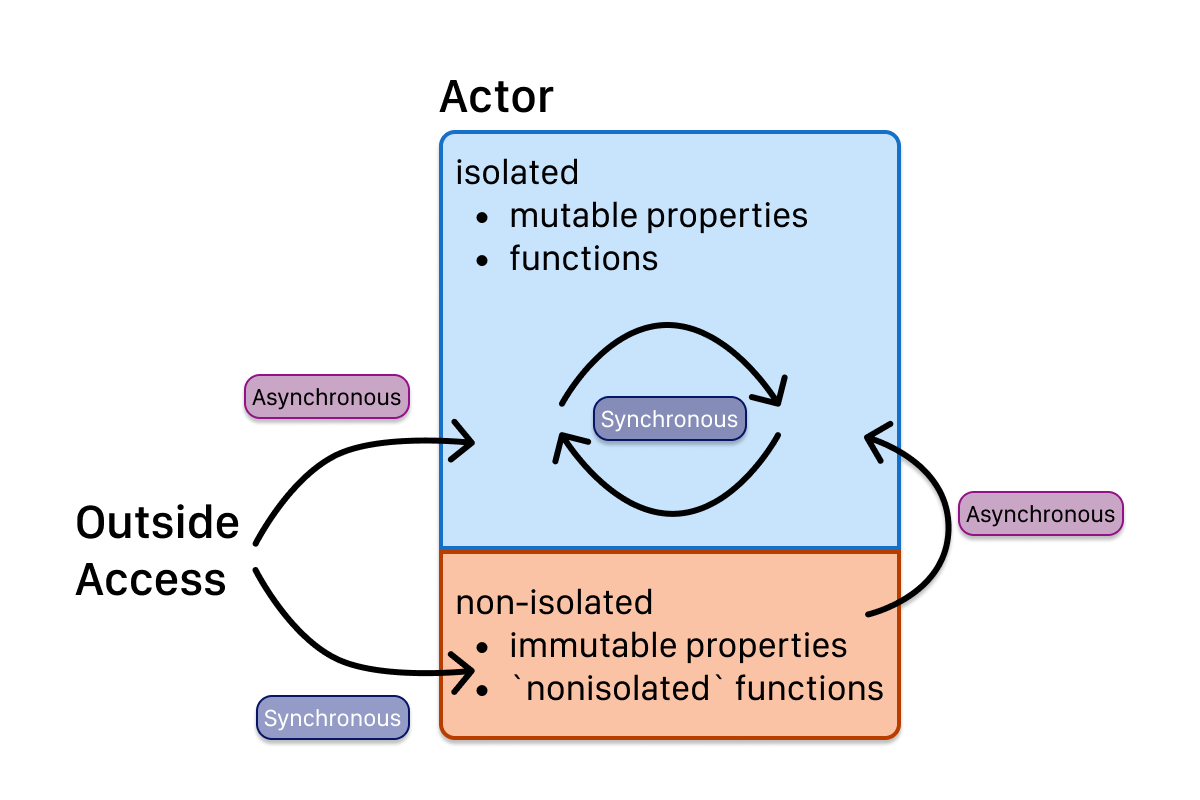 Let's update our usage of setHerdName(_:) with await since we are calling into store from a non-isolated context.

It's worth noting that with the actor access model being async/await we are implicitly saying that our code should run on a background thread. However, there is one exception to that rule, the MainActor, which we’ll get to that later. Another thing to note is that the system decides which thread an actor is run on, though for most occasions this is just an implementation detail.

As you can expect, an actor that is built to protect its mutable state would not fulfill its purpose if mutable reference types were able to be modified outside the confines of the actor. To prevent this "leaking" of shared mutable state there is a new protocol Sendable. Sendable types are those that can be safely used in concurrent code either because of copy-by-value semantics, immutability, or thread safe implementations. This includes all value types, actors, let defined immutable classes, thread safe classes, and functions marked with @Sendable, and more. This is even enforced by the compiler, preventing us from introducing race conditions in our code. Neat!

⚠️ Sendable enforcement has not yet arrived - Xcode 13 Beta 4

Earlier I mentioned an exception to the rule that actor operations are run on a background thread, that exception is the built-in implementation of the actor protocol, MainActor. The MainActor is special in that it represents the main thread. Any types, functions,… annotated with @MainActor are guaranteed only to be run on the main thread, think DispatchQueue.main.async { … }. As expected with an actor, calls to functions marked with @MainActor from outside of the MainActor are asynchronous and must be awaited. That is to say, code already running within the MainActor can make synchronous calls within the MainActor, only calls to the MainActor from outside must be awaited.